Pronounced “Coova” (with a hard V)
(Mexico to Santa Clara)

First stop … Isla Mujeres, the island of women. It seemed appropriate if one is to travel with a man they met less than a week prior, and a perfect place to get one-way tickets to Havana. 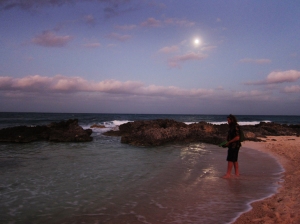 Our first night in Isla Mujeres was graced with the natural splendor of a full moon. Later that night, Miles left our common room to smoke one more cigarette before bed. He returned at day-break. Apparently, he started a dance party somewhere. The next day, the whole island knew him. I felt I was escorting a celebrity.

Havana was exactly as I imagined, with sexy women and cars and sharply dressed men with cigars. We criss-crossed the town with our packs. I wore fancy heeled boots to pretend I was dressed up.

Once again, traveling with Miles felt like escorting a celebrity. Apparently, some telenovela character named “Otavio” is popular in town. His particularity: money appears in his pocket if you pull his beard. We’re still trying!
This hopeful man here used to be a pro-wrestler, now retired. If you look in the back, you might see the “Hemingway” sign. This is the bar where he used to linger. We did for a little while as well, just to say we did. But there was too much to explore, and music to be found to stay in one place.

A storm was underway when we got to Havana and most of the streets along the water were closed. It added to the excitement.

Miles said he prefered to just wing it – buy a map and see where we end up. But, I still bought a guide’s book. In the end, he was right. The guide book, as most locals, tried to funnel us to the tourist spots. We had better luck and met more interesting people when we just let the wind guide us. This man here, claims that his popcorn is the best I’ll ever taste. But, by then, we had already discovered that Cuba is much more expensive to visit than the web tells you. We agreed to tightnen our budget so we could at least last 8 days (two weekends) – no fancy restaurant, no souvenirs, no 1950s taxi. Little did we know the weather would keep us there a month!

Cubans are naturally friendly, curious and gracious wherever we went. The beard did help, as did speaking Spanish.

This is a guagua. The Cuban government would prefer that tourists stick to the tourist buses, but these were out of our price-range and not conducive to the kind of experiences we hoped to have. Guaguas stink of diesel fumes and sweat. I like them.

We made a small mistake and landed in Varadero, one of the most beautiful beaches in Cuba, and definitely priced for tourists. Luckily, we met Gorge, owner of a small but comfortable room near the beach. He understood from the state of my pack (see the foam protruding from the shoulder strap) that we were not his usual clients, and gave us a good deal. We left the next day on a guagua, in spite of the driver’s protests (he could have gotten in trouble for our presence on the bus. Cubans on Cuban buses, tourists on tourist buses!) a nice lady up front said “Oh, just let them on”, and we were able to escape Varadero by hiding in the back row of the bus. We had no such trouble in smaller, less touristy towns.

I made Miles carry all my rum!

Camping is illegal in Cuba. But as long as we get up before anyone else, we’re just fine on the beach.

Colorful streets of Trinidad. We spent 4 days in Trinidad. We danced to live salsa bands, went to the beach, ate 12 cent-pizzas, explored the town and met friends from Slovenia, Norway, etc. We hadn’t meant to be there so long, but by a series of missed buses and disappearing taxis, it ended up being our main Cuban town.

Miles is on the Hayduke trail right now, so he won’t see these for a while. But, he did say I can pimp him out. So, if you want the next few photos in this series, when the Purple-Rain adventure skirt comes off, please private message me. They’d be taken down as offensive if I posted them anyway … 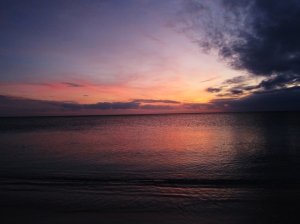 Sunset over the beach near Trinidad. By then we both were battling foreign-bugs-stomach-excitment, but no matter, a sunset is a sunset!

This is the night Miles cooked me dinner with twigs in a cinder block. I’ve fallen in love for less.

The first greens we ate since arriving in Cuba. Delish! We stealth-camped on the beach that night. I had diarrhea and we had to pack up before day-break because walking tours from the nearest 5-star hotel were heading our way. It wasn’t our best morning. 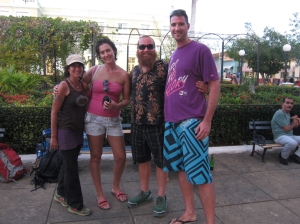 Slovenians are tall! We had fun with these two for a few days in Trinidad. We have plans to visit, of course, but who knows … that day, a taxi driver said he’d take us to Santiago if we paid for the fuel because he wanted to visit his mother but couldn’t afford it. We waited for 7 hours at the park where he said he’d pick us up. I don’t know if we missed each other, or if his boss said no. Either way, it was frustrating then, but good in the end. Had we gone to Santiago, we wouldn’t have met Daneel. 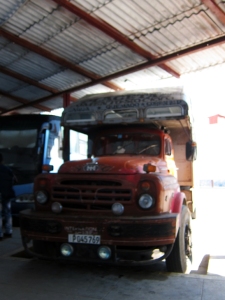 Since the taxi never showed up, we went to the bus station. All the bus were gone, except for this one. It went to an obscure little town in the exact center of Cuba. We didn’t know anything about it, so we got on that bus. It was a rough ride, and on several occasions, the bus lurched forward, propelling little old ladies off their feet. Miles, living up to his Knight’s name, rescued them. They giggled and blushed. He was the hero of the bus. We met Daneel on that bus.

Daneel was an amazing entrepreneur, undaunted by the limitations others could perceive in a communist country. One of only 6 people in the whole country certified to perform spelunking rescue, he owned a mishmash of climbing gear. There is no gear shop in Cuba, all were gifts from former traveler. What he wasn’t gifted, he created, like these “Prana” climbing pants here … painted on for style points.

Daneel invited us in his house to meet his family. We talked climbing and got excited comparing gear. He then said “Next time you come to Cuba, we should go climbing.” I said “Can we go tomorrow?” – he looked at his son (Daneel Jr) and said “you’re taking tomorrow off, we’re going climbing.” – My kinda dad! We took a few buses, hitchhiked and finally walked across fields of sugar cane. Climbing in Cuba is not like climbing in the States. You have to be ready for the 3 hrs of sardine-packed ride each way for an hour climb. It was my favorite day in Cuba. 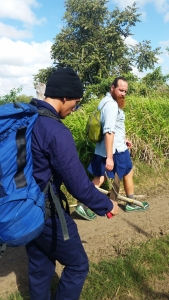 A little sugar cane snack before the climb.

Limestone, one rope, one pair of climbing shoes and a few harnesses. Miles’ feet were too big for the shoes, so he just belayed. The rating system is different from ours, but I’d say they were about 5.9 and up. I was rusty, but everyone gave me tight belays.

Daneel had been taught how to climb by the “Climbers for Christ” a humanatarian group that organizes workshops and competitions in Cuba. Daneel’s other son, the one we didn’t meet, won the competition the year prior. I’d say his little brother, who was with us, will be a good candidate for the next round. 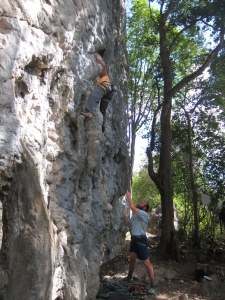 Daneel led the way. It was warm and quiet and smelled good of sugar cane plantation below. Perfect day. 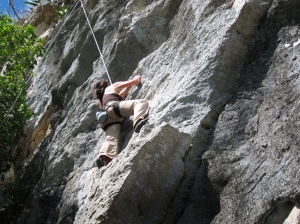 I didn’t make it up all the routes. I’m okay with it. I climbed in Cuba. 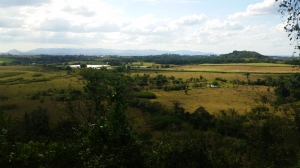 The view from the climb. The middle of the island has little mountains. Beautiful spot. This is where we ran out of money and had to head back to havana. So, still, we have not seen half the island. We have plans to meet Daneel again next year, and this time travel together to Santiago and to Pico Turcino, the highest point in Cuba.

Leaving the climb with smiles all around. The hill behind is where our climbing wall was. To get there we had to ask a farmer permission to cross his land. He said that the goverment is wary of climbers and that the last time a climbing party came through he was interrogated. Daneel assured him there would be no trouble and that he would handle any official that comes with questions. 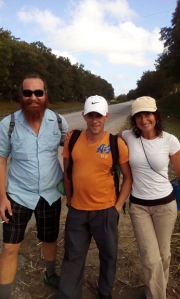 Back on the road, ready to hitchhike. Miles and I were instructed to keep our mouths shut. Cubans range in color from deep dark to Miles’ shade of red, so as long as we kept quiet, we had a chance of paying the local fare (a few cents instead of a few dollars) or ride for free.

Daneel Jr. cooked us a post-climb meal that borderlined on surreal. Most of the vegetables came from Miles and my food bag. I gave him sad sad vegetables, he served us magic. The grandpa of the house had caught fish that day. The grandma of the house led us on a tour of the rich botanical garden she calls her yard.

I called these two the “brothers in vice”, seating on benches, listening to music, drinking sugar drinks and smoking big cigars. Daneel Jr. came with us for part of our journey back towards Havana. Such a treat. In one restaurant, the waiter tried to rip-us off, thinking that our Cuban friend would be in on taking advantage of us. Daneel yelled at him, indignantly “they are my family!” No one bothered us after that …

Next … back to Havana to find a boat to get home.