Here is a set of strange thoughts on the status of the current world and on being in the hospital and having the truck in the shop.

Exactly a year ago, I was getting out of the hospital in Vermont. I landed in the hospital because of a pain in my lower belly that caused me such worry (because of fear caused by internalized stories about appendicitis) that I left the trail. While in the hospital, I was cared for by the most attentive doctors and kind nurses. Everyone was genuinely concerned with my special case and determined to solve the mystery. After state of the art CT scans, ultrasounds, xrays, blood samples, etc … the doctors were still at a loss as to what caused my ailment. But, just in case it helped, I was fed heavy doses of antibiotics intravenously. I didn’t like the method, but had to trust the process. I surrendered because I had no choice. I left the hospital on my own two feet carrying my own pack after 5 days. The pain was still a little present, but I knew I needed out. I couldn’t keep getting zapped and poked and fed high fructose corn syrup and white wonder bread. I just couldn’t.

The pain came back a few times. Determined to self-heal, I hit the Google and books hard and settled on a regiment of turmeric and ginger tea, raw garlic and watching my stress level and the energy I fed to the worry. Not only did it dissipate the pain, it also started a whole branch of research interest in my brain. Plant-based medicine, which led to Ayurveda, then to plant intelligence, and ongoing …

Now, get this … history repeats itself so precisely.

In my dreams, the truck (the Catmobile) and I are interchangeable. I am the truck and the truck is me and we can walk, drive or fly or do whatever we need to.

This year, the truck version of my extended Self is in the “hospital”. It landed there, again because of my worry, based on beliefs I hold about mechanical failures causing more damage than symptoms. Once again, I encountered nothing but kindness, goodwill and dedication to my cause from all 4-5 (or however many, I stopped counting) mechanics who made it their personal quest to solve the Noise mystery. State of the art diagnosis tools failed to find a cause. This week (assuming I figure out the finances), the truck will return to me with its mystery unsolved. I feel, as I did a year ago, that I need it out of there. One of the early mechanics damaged my front wheel bearings while trying to investigate – the truck’s corn syrup equivalent. The Noise remains, and I am determined to solve it via alternative methods. No, not plant based, but feeling based …

In my research on the topic of plant intelligence I have come to understand (believe) that everything – everything! – is alive. If it is made of matter, it is a coherent system of smaller parts, by definition. If coherence has emerged, then necessarily, responsive intelligence of its own particular kind also exists. And if that is the case, then it is up to me (the human) to refine my listening tools to communicate with this intelligence. Other organisms already do this. I talk to plants and they respond in healthy growth. I talk to my body and it responds with cravings to let me know what it needs. Muscle testing also works for me. But talking is easy – true, deep listening much less. It requires suspension of beliefs, expectations and preconceptions – a good exercise regardless. I have been talking and “listening” to the truck for 17 years. It has demonstrated its own sharpness of listening skills – like actually starting with a completely dead battery after I pressed my forehead on its steering wheel and explained how far and stranded we were (just one of many incidents – I have stories!). The truck has kept me informed of its basic needs. I “know” when it needs an oil change or filter change, regardless of mileage. The truck “tells” me. That’s a start, but I need to “hear” even deeper and more accurately. That’s how the Noise mystery will be solved, not in a shop by changing every possible part that “could” make a noise (and I mean that with much gratitude for what was done so far … I got it from here).

The world is shifting. And these two seemingly “negative” mysteries in my life are nudging me to shift with it.

One last esoteric thought on the topic … I think each identifiable form (you, me, that truck, that tree) is a part of a greater whole. I think the shift that is occurring is an emergence of coherence, the realization of the consciousness of the “Sum”, which is greater than its parts. And a shift of perception from individual to Whole Intelligence. The intelligence of the Whole system, all included – and the discovery that Free Will exists at that level (and that we have been calling it “fate” all along). And when we get there, I would like to hope that channels of communication between the parts will be wide open. Man, what a world to live in that will be, when we can communicate with everything. 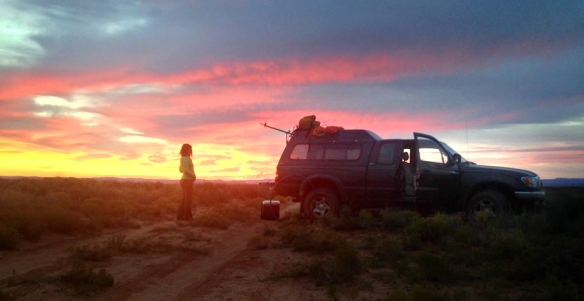 13 thoughts on “Are you feeling the Shift? (also about hospitals and mechanics)”