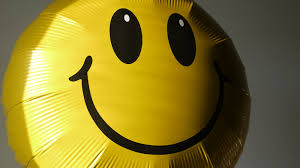 This morning at the Be Kind festival, a smiley face helium balloon – one of at least a hundred tied to various posts, plants and tables – detached itself from its string to come fly straight in my face.

I grabbed it with both hands and looked it straight in the eyes. With several witnesses’ concurrence, I decreed that balloon mine, or rather, since it had chosen me out of all the people under the tent, maybe I was its. The lady in charge of the festival happened to walk by with scissors right then – don’t worry, this isn’t a morbid love story. When she heard of our serendipitous encounter, she promptly cut part of a string from another balloon so that we might tie a knot to keep us together.

Oh, we had such a joyous time, for a short while. We socialized, took walks in the park, smiled in the face of dark clouds and rainy weather. I still don’t really know why my new friend left me. It surreptitiously cut its string as I reentered the tent, and flew away. By the time I realized it was gone, it was already high over the city and heading straight towards the mountains. I watched it get smaller and smaller. It seems happy there, or at least it was still smiling. I was sad to see it go, but also, I understood.

“Yep, that was your balloon alright.” were the only words of comfort my friend could offer.